The Phenomena of Funk

At long last, the next episode of the podcast is with you. No long preamble this time, no excuses as to why its late (lets just say work has taken its toll, as has family situations) – just straight into the nitty gritty. This is Episode 23 – it is “The Phenomena of Funk”. 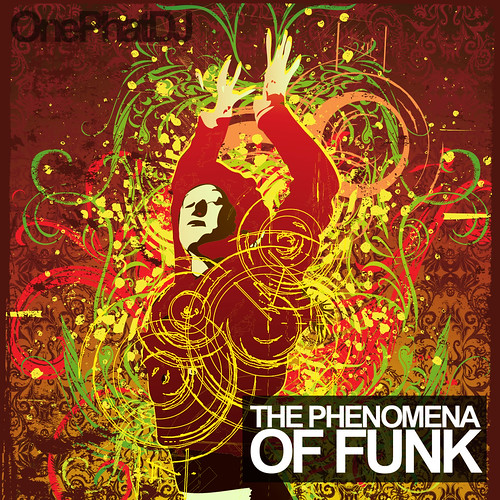 Solo – One Man (Club Mix)
We’re starting the mix off with a fairly mellow affair compliments of Solo. Covering Chanelle’s 1989 hit track, this is a pretty soulful disco track which was played by my friend DJ Cruze back in June last year. It’s got all the ingredients in there that make One Phat DJ happy – synths, strings, bass and chunky beats. It should break you in nicely…
Solitaire – I Like Love (Moto Blanco Club Mix)
Solitaire (also known as Lewis Dene & Dave Taylor) released this track a few years back but I completely missed it. When funky house favourites Miki Moto and Bobby Blanco got hold of this track and cast their magic spell over it, it was just irresistible. I couldn’t let this slip by again when it was perfect for the One Phat DJ podcast. With its gospel feel to the vocals and fantastic build ups, its one for the dancefloors that should get you moving without any problems.
Freemasons ft Julie Thompson – I’m Not Alone Now (Album Version)
From the album Shakedown (which I eventually got, no thanks to 101cd.com‘s appalling customer service), the Freemasons have gone for their winning formula of pop-tastic vocals laid over some funky beats and sounds. The album is crammed full of quality tracks, from remixes to new productions, you’d be foolish not to go buy a copy from HMV who are offering a special edition with a few added tracks.
Groove Junkies and Andy Caldwell – I Believe In Dreams (Groove Junkies MoHo Mix)
After realising I had been paying for a subscription to eMusic for a few months without using it, I went on a rummage through their library. While its quite got a comprehensive catalogue of music from all genres, its funky house collection is still quite minimal. I did, however, find this little beauty in amongst the tracks from the Groove Junkies and Andy Caldwell. There are a few different remixes available on eMusic but it was the Groove Junkies “MoHo” mix that had me nodding my head the most.

Soul Seekerz Present – Electric Shock (Drayman Remix)
We’re breaking it down a bit now and injecting some much-needed piano hooks, courtesy of the Soul Seekerz. No vocals this time, just plenty of funky synth action laid over a catchy bassline.
Soulshaker ft Ce Ce Peniston – Shame Shame Shame (Bassmonkeys Remix)
I heard this track way back last Summer on Fierce Angel Es Vive Ibiza and immediately fell in love with it. Whether it was the return of soul diva legend Ce Ce Peniston or the ridiculously catchy lyrics, I was hooked. I finally got my mits on a copy of this last month, having been remixed by Fierce Angel’s very own Bassmonkeys. This is one funky number – turn it up… LOUD!
A&C vs Kiki Dee – Music In Me (Extended Vocal Mix)
It’s another cover of “Music In Me”, this time courtesy of unknown dance act A&C. I played a version of this a year ago by the Boogie Pimps in Funkin’ February so its obviously ripe for a remixing. Any excuse to get some catchy lyrics and bouncy basslines in the mix…
Soul Seekerz ft Kate Smith – Party (For The Weekend) (Vocal Mix)
I’m taking the mix a little deeper now with another track from Soul Seekerz, otherwise known as Julian Napolitano, Simon Langford, and Andrew Galea. This track will be their debut single and features vocals from London talent Ms Kate Smith. The Soul Seekerz have worked on numerous tracks in the past in several different guises but this will be their first official release together after over ten years in the industry. Catchy vocals and dark funky sounds should make this a huge track in 2007.
Bassmonkeys ft Soozi Q – So Beautiful (Thrill Bill) (Vocal Club Mix)
The Bassmonkey’s previous track “The Answer” is currently my most played track since January 2006 so there was a lot of expectation from their follow up tracks. I’m glad to say that they aren’t just one hit wonders. So Beautiful is a very funky number and is sure to get tonnes of play around the club scence. There’s a really hooky guitar sample in “So Beautiful” that I can’t identify which is accompanied by Soozi Q’s lovely vocals.
Dave Spoon ft Laura Vane – Won’t Do It Again (Sunrise) (Seamus Haji & Dave Spoon Vocal Edit)
Already gaining huge exposure around the club scene, Seamus Haji’s Big Love label have found a belter in this track from Dave Spoon. Yet more deep sounds are found in “Won’t Do It Again” – hooky synth riffs, filthy basslines and full vocals from Laura Vane are taking this track to the top of the dance charts this year.
Club – Deep Inside (Eric Smax & Thomas Gold Remix)
Another track that was on Fierce Angel’s Es Vive Ibiza has finally made it into my record box. The moment I heard this track, I was addicted. Sampling a guitar riff from Red Hot Chili Peppers’ “Love Rollercoaster” (which was also featured on the Beavis and Butthead movie soundtrack), Club have added some sweet diva vocals to make “Deep Inside” a really funky, dirty track. Just try not to dance to this…
Andre Basho – Boom Shaka (Full Vocal Mix)
I’m going to go back a few years now to my days of old. I heard this track in a DJ mix way back in 2002 and was hooked. I had to find out what the track was and where I could get it. I managed to dig up a white label copy on eBay and paid a fortune for it to be shipped to me. It wasn’t until recently when I listened to a mix of my own and remembered how much I loved it. Rather than going digging through my vinyl collection, I managed to find a copy on Beatport and downloaded it instantly. Using a very recognisable break beat, some ridiculously catchy vocals and a simple but effective bass line, it became One Phat Tune.
Armand Van Helden – The Funk Phenomena
You might recognise that beat I was talking about now. We’re going way back to 1996 now when Armand Van Helden was just starting to carve his name in to the dance music industry. The Funk Phenomena is one of those tracks is just so simple yet so addictive. Classic.

Do as you would normally. Listen, review, critique, big up your family and friends – just let me know what you think and what you want next time.
I’ve already got a few tracks up my sleeve for the next podcast and I have a feeling its going to get a little “twisted” in the next episode. I’ve also got a little treat for you later in the month – I just need to iron out a few legal issues. Until then, just appreciate the Phenomena that is Funk.
Update: I’ve added a CUE file for the mix so you can split the mix into tracks or burn the mix to CD. It works best with the Enhanced Version.