Some may have seen this coming, others probably wanted it to happen but didn’t expect it. But it’s Christmas so who am I to disappoint?
Due to such high demand, I’ve dusted off the old mixing gear and thrown together the very last mix for the One Phat DJ Podcast. Call it an early Christmas present for all those new iPods that will be appearing under the tree.
One Phat DJ has made one last return in his final ever podcast mix – Encore. 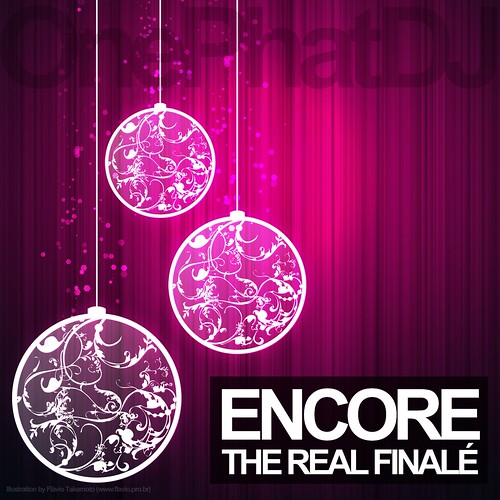 Packed full of the some of the biggest house tracks from the last quarter of 2008, you won’t be disappointed with the quality of tunes in this mix. With the likes of The Shapeshifters, ATFC, No Halo, Future Funk, Haji & Emanuel, Wawa & Herd and Hoxton Whores thrown in, it’s almost a mini “best of 2008”.
Richard Earnshaw has been a busy man this year, putting his final touch to numerous floorfillers – the fact he has three remixes in a row at the start of the mix indicates just how impressive his work has been. No doubt we’ll be hearing more from Mr Earnshaw in 2009.
You’re also treated to some new material from a couple of local West Midlands ladies in the middle of the mix, firstly from the lovely Beverley Knight whose teamed up with Seamus Haji and Bryan Chambers in the brilliant “The Pressure“, then a funky number from new Birmingham label Nightingale Global Records with Pimp + Jam‘s “Feelin’ U Feelin’ Me” which features the vocals of Norma Lewis.
There are also some classics (and all time One Phat DJ favourites) revisited towards the end of the mix in ATFC‘s 2008 remix of his classic collaboration with Lisa Millet “Bad Habit” and The Shapeshifters injecting a touch of electro into their 2003 hit “Lola’s Theme“.
The whole package is wrapped up with a cheeky bootleg from Hoxton Whores who’ve mashed up Eric Prydz‘s “Pjanoo” with the vocals from “Fusion“. This track has had massive support from the Hed Kandi circuit and I must admit – I actually prefer it to the original Pjanoo track. What better way to finish off the year?
So what are you waiting for?
Download [download#1]