In the third and final installment of One Phat DJ’s “Best Of 2007” series, we venture into the tougher side of funky house and get you all psyched for a good dance. In 2007, the dirty bassline was very prominent in the dance scene so there was plenty of material to get your knickers in a twist, getting the dancef loors really sweaty while the music verged on hard house. Needless to say, the majority of that material will have made it into this mix so its time to loosen up before I take you on your last journey of 2007. This is Episode 39 of the One Phat DJ podcast – this is the “Best Of 2007, Part 3 – Euphoria“. 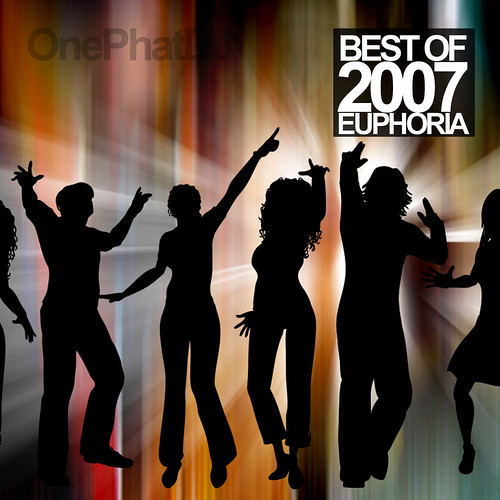 I’ve long been a fan of The Shapeshifters, ever since the massive 2003 hit “Lola’s Theme“. However, most comebacks in the dance scene are either non-existent or really poor. Thankfully, the Shapeshifters broke the mould and managed to make a great return with some banging tunes, one of my favourites being “New Day“.
Now that we’ve set the scene, its time for another great track from early in the year with De Souza‘s lush cover of “Guilty“, this time with an added twist thanks to Bimbo Jones.
Time to inject a bit of a Latin feel into the mix now compliments of Sergio Flores and the Japanese producer Mitomi Tokoto and their infectious rumblings in “Hold On (That Piano Track)“.
More Latin inspired sounds follow with the German producer Raul Rincon and vocalist Carolina Escolano throwing their collaboration into the mix with “Mi Amor“, a truly uplifting and catchy tune which Hed Kandi proudly featured in their Disco Heaven compilation.
We then venture into commercial terrain with two massive hits from late Summer, starting off with Armand Van Helden‘s anthem “NYC Beat“, shortly followed by Fedde Le Grand‘s reworking of Ida Corr‘s “Let Me Think About It“, my favourite tune from the entire year. I really can’t put my finger on what makes the track so perfect but it certainly got bums shaking around the country when it went straight into Number 1 of the UK Charts.
We then return back to start of the year with the first track that got my attention in 2007 – the synth happy, lyrically blessed “Need You Tonight” from the Kingpinz and Antonio Lucas.
Henrik B‘s reworking of the dance classic “Soul Heaven” had to get into the mix somewhere and this is swiftly followed up with Radio 1’s latest signing Dave Spoon and his track “Won’t Do It Again (Sunrise)“.
It wasn’t long before there would be commercial successes, this time from Ministry’s Data Records. Alex Gaudino‘s saxophone-induced “Destination Calabria” was a monster track through the summer months, as was Dada‘s filthy tune “Lollipop“. Kudos goes to Sandy Rivera for getting away with making this innuendo heavy track one of the most catchiest tunes of 2007.
Yet another Data record follows with yet another saucy video, this time in the form of Mason and Princess Superstar with their huge hit “Exceeder (Perfection)“.
To wrap up the whole mix (and series), what better way than to get a dirty funked up remix of Robyn‘s Summer anthem “With Every Heartbeat” for you all to sing along to? Yeah, its missing those amazing string breakdowns but we need something to fit into the mix and I think this version does perfect.

Let me know what you think of the mix and the whole Best Of 2007 series – you can either post something on the blog below, on the Facebook group or on the iTunes listing. It’s entirely up to you. I just hope you’ve enjoyed it. It’s been fun (if a little demanding) but I sure hope it was worthwhile. General feedback has been really good so far so I must be doing something right.
So with Part 3 all done and dusted, its time to pack up 2007 and move on to 2008. The next podcast will return to the normal format, showcasing the latest releases in funky house, some exclusives, some you may have already heard, most of them available for you to buy online. I may change the regular release date as well – more information on that later when I make some decisions.
Here’s to a funky 2008!